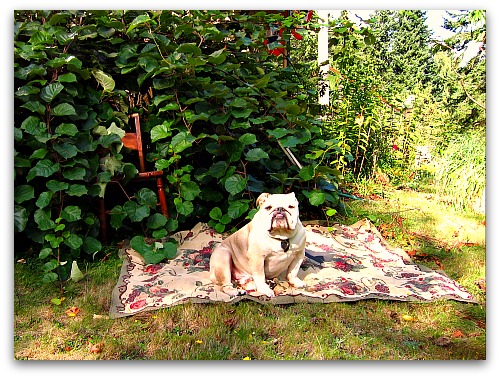 …a fuzzy kiwi vine kidnaps the napper.  (Later, Boz drags me out in a daring rescue.)

Fuzzy Kiwi vines are notoriously vigorous, so vigorous in fact that I almost went missing one summer day. Cloaked by coiling vines with questionable intentions, an afternoon nap almost resulted in a search and rescue. (I’ve seen Little Shop of Horrors.) After seven years of kiwi vine domination, which at one point included the summit of my second story house,  I was determined to tame the beast and domesticate its demeanor. Lucky for me, an ice storm accommodated my plan by pulling the vine off of the house for easier pruning. Thank you Mother Nature.

My tools of the pruning trade included a reciprocating saw with pruning blade, floral pruners, sturdy loppers and Felco pruners (not shown).

After locating five to six of the strongest and healthiest canes, I kept them intact and clipped out the wild mess of remaining vines like an army barber takes on a head of hippie hair.

Working from one end to the other–prune, separate, repeat–I pulled the intact tangle of vines away from the parent vines in one fell swoop. While the newly pruned kiwi vines seemed a little naked and a lot diminished, I knew my pruning tough-love was necessary for the health, productivity and life of the vines. My new plan is to build a strong (very strong) wire trellis arbor that will guide as well as corral growth, resulting in a vine focused on production, not abduction.

Boz has no idea what it is, but he’s certain it’s edible (and he did rescue me from the clutches of Kiwi the Creeper, after all) .

Growing Peach Trees in the Pacific Northwest: It’s the Pits

Ordering Bareroot Trees: What to Expect