Autumn’s bounty: a bowlful of chestnuts, a tabletop of squash

I have a thing for chestnut trees; let me count the ways.

I’m so smitten with the tree that I’ve planted several different varieties on my property, most of which should begin bearing about the time I start gumming my food and asking for a walker. As an optimist, I’m willing to wait for my nutritious reward or at least leave a tasty legacy. While European, Chinese, and Japanese Chestnuts are more common, American Chestnut trees are relatively rare in North America, the result of a blight at the turn of the century that decimate stands in their East Coast range. Surprisingly, in Washington state, some trees from pioneer plantings still survive. 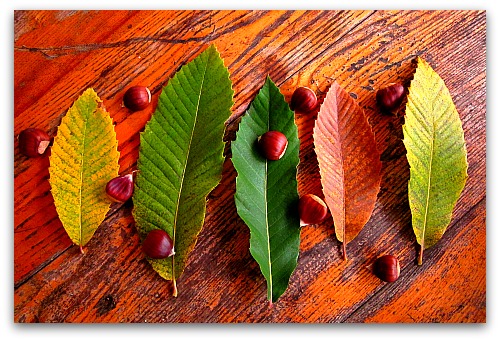 Chestnut leaves are some of nature’s handsomest

Recently, at the Vashon Island Growers Association’s (VIGA) annual meeting (and awesome potluck), I enjoyed chestnut butter and pumpkin dinner rolls courtesy of Jennifer from Pacific Crest Farm. The yeasty crescents were no less than divine golden chariots delivering gooey chest-nutty goodness to my awaiting piehole.  When I asked Jen for the recipe, she said, “I just pureed our chestnuts and blended some honey.”

Just? Just! And maple syrup is just tree sap. What Jennier made was spreadable ambrosia.

Now on to the recipe, as made by Tom

Good to know: use a serrated knife to cut a line in the chestnut before heating it. This makes the nut easier to peel, and keeps it from exploding when roasting (much like a wee firecracker).

My first attempt was an abysmal failure based on two big errors: I roasted the nuts too long and left the outer soft skin on (see photo above). I suspect granite gravel would have been softer and a glass of quinine less bitter. The brown skin pellicle (as it’s called) is unabashedly bitter and must be removed. Batch two and three were worthy of human consumption, but batch one was inedible, not only to me, but to local crows.

On the bright side, when prepared right, chestnuts offer a wide variety of applications in the kitchen, from gluten-free flour, to soup, cakes and stuffing.  Did I mention they are rich in vitamin C, cholesterol free and half the calories of other nuts. And should you wish to plant one, it’s majestic presence will rule over your garden and grounds for generations to come (just leave peeling and cooking instructions as a courtesy).

Rhubarb Pie As It’s Meant to Be: Delicious!

A Recipe for Bread and for Life