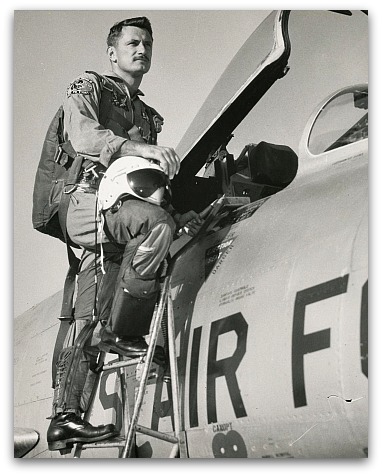 My super hero could fly.

My first memory of Dad as super hero came in the first grade. Allowed to navigate the theater concession stand on my own, I was having trouble making headway to the front of the counter. When my father showed up to check on me, he could see the best of human nature was not shining on his six-year-old son. In the hierarchy of bad behavior, my father finds line cutting and taking advantage of kids as egregious as lying, cheating and disrespecting the flag. At first, I was embarrassed by his admonishment of the clueless teens and oblivious adults, but as they backpedaled, made excuses, and finally apologized, his superpower was revealed: protector of Tommy.

Down time with Dad and sis.

My Man of Steel wasn’t like most Dads, but at the time I had no idea he wasn’t the norm. He flew fighter jets (didn’t everyone’s Dad?). He brought glory to the Crimson Tide. He sank free-throws from a county away, and crossed the globe with an ease reserved for neighbors who cross the street. While his life and accomplishments were big, it’s the seemingly small, unmentioned moments that I replay with fond recollection. There was the time he proclaimed I was the best fisherman (since retracted) or the day I rebelled at mowing the lawn, and waited until dusk to tell him it was too dark to mow. He suggested I locate a flashlight.

Our in-house pillar of strength had his melting moments, like the uncharacteristically revealing letter he sent me in college, where he wrote, “your mother’s the best thing that ever happened to me.”  Saying holiday grace was a moment of pause, togetherness, and thanks that (though never admitting it) would choke him up.  During long absences, he would entrust and recognize me as “Man of the House” until his safe return (good thing Mom was my back-up plan).

Last week my father turned 80, and my mother, sister, brother, niece, nephew, aunt and I were there to see that he celebrated the milestone with a full-court press. We surprised him and he was delighted. At breakfast days later, he said the weekend was the best he ever had.  It was nice to learn we had some super powers of our own. Happy Birthday Dad, from your former crackerjack “Man of the House” and equally gifted (and-likely-still-the-best) fisherman son.

Little man with a big fish (and big hero).

Sam and Dom Sittin’ in a Tree…