How to Make a Cheap and Portable Worm Compost Bin

My interest in worms began at an early age when I realized the creatures had special powers; they could make my sister squeal and lure lake fish to my awaiting hook. The night before our fishing safaris, we would water my grandparents’ lawn, and with the finesse of a jewel thief and speed of a mongoose, pluck up night crawlers escaping from their soggy dens. (Don’t be fooled, the  slimy critters are fast.)

Nowadays I appreciate them even more as natural alchemists, turning green garbage into gardening gold. A little red wriggler can breakdown a substantial amount of kitchen scraps– an estimated one quarter to one half pound of waste every day for every pound of worm.

I came up a large capacity do-it-yourself worm bin as a cheap and easy way to enjoy the benefits of vermiculture without a lot of building fuss and preparation. The first worm bin examples are smaller versions from my composting past.

The Green Cone food composter is an great urban solution for food wastes. A hole is dug, the basket dropped in and the top cone and lid attached. Vegetarian food scraps are added daily, and some time later, worm castings and compost can be removed and added to the garden. This system works best with two cones. When cone 1 is full, start supplying cone 2 with edibles. By the time cone 2 is full, cone 1’s contents will be ready for use as a soil amendment or light fertilizer.  City of Seattle residents can buy the $100 bin for the subsidized price of $25  or two for $40. It’s a rotting good deal. Learn more.

The Cadillac of Worm Composters is a five-layer tower version that’s a little more complicated and requires closer operational attention. It’s a pricey little bugger at $100, featuring a drain spigot for the removal of excess moisture. I use the coffee-colored liquid  as a fertilizing compost tea. Unfortunately this plastic stackable unit couldn’t keep up with my volume of leaves, rinds, peels and stalks.

Tah dah! Being cheap is the mother of my invention. Here’s the solution, an $11.99, 33-gallon plastic waste can on wheels with a locking lid.  A few added holes, bedding, and worms, and you’re good to go.

Begin by drilling drain holes on the bottom of the can, which allows liquids to escape. (We’re not trying to create primordial soup here.) At the other end, drill quarter-inch holes in the lid (on both sides) to allow for air circulation and venting. Worms need oxygen, too.

Lid off, line the can with shredded newspaper, then toss in ten inches of peat moss (fine compost and coconut coir work, also). Mix shredded paper into the top four inches and then add your red wriggler worms to the mix with a splash of water. Top the whole thing with your veggie leftovers–old lettuce leaves, apple peels or asparagus ends, etc. (My worms eat well.) Add the lid and lock it in place. 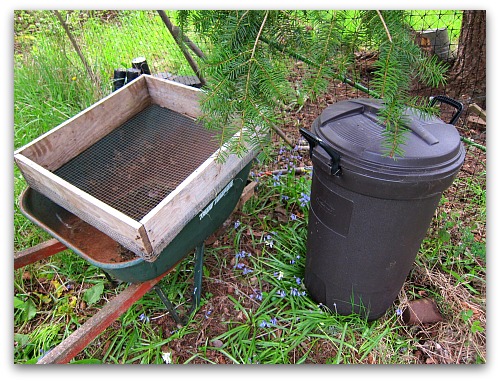 My worm bin sits under a huge, shading fir tree, to keep it cool.  There, the little guy-gals (they’re hermaphroditic) do their thing.

Every other time you add plant scraps, toss in some shredded paper for good measure and bedding material.

Tips and things to consider for your Worm Bin Wonder

Your roses will nod with approval.

UPDATE: Your Worm Bin in Winter

Option 1: Store in non-freezing out building