Mother Nature provided a reality check this week,  dispatching an arctic storm that toppled trees, sliced power lines, coated roads with ice and dispensed record low temperatures. The formidable storm left the entire island in the cold and without power.

The first day was stunning, a winter wonderland viewed from my warm house–cocoa in hand, Ella on the iPod. That night high winds blew in from the coast and the house began to creak (like my joints after a day of gardening). 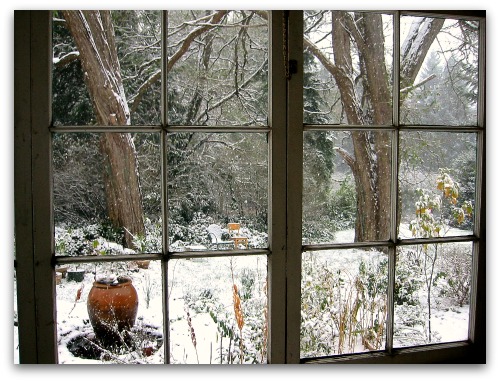 About 3:00 a.m., I was awakened by a jarring crackle,  followed by a frightening crash.  The November gale had taken out the old madrona outside my bedroom window. Boz and Gracie, who usually bark at anything from lint to rustling leaves, were content to sleep through my backyard deforestation.

Downed madrona (missed it by that much). Photo was taken after the big thaw

November storms in the Northwest pack a wallop and are legendary, conjuring up winds that can disassemble a suspension bridge or sink one designed to float. A few minutes later, the power went out and the temperatures dropped, two realities that didn’t change for the next 48 hours.

When it was all said and done, modern life had stopped: no heat, no hot water, no phone or computer, that which I take for granted was gone.  In a stroke of unfortunate timing, I had just removed my wood stove to rebuild the hearth and fireback around it. I toyed with the idea of reconnecting it without fire retardant flooring and backing, but that seemed like a surefire way to win next year’s Darwin Award.

When I look back on those two days (now that feeling has returned to my fingers and toes), I have to say I learned a lot about myself, my neighbors and my community; warmth isn’t always supplied by electricity.

Things are back to normal now, but I did learn one more thing. At first I thought I had endured two days lost, but the truth is they were two days found.

PS — Here’s a good read from The Seattle Times about some Vashon neighbors who were prepared.

Vashon Snow: After the Storm(s)

Vashon: At Home in a Snowglobe