My friend Greg returns to the Pacific Northwest (via stints in New York and LA) to embrace his sartorial roots and love of Filson. (No Greg, not a bit overdone.)

Vashon Islanders enjoy a style all their own. Most Fashion Police have been voted off the island and everyone tends to wear exactly what they want. Vashon is a place where peasant skirts never die; tie-dye is a revered art form; the lumberjack look has remained a style staple since 1888; wool sweaters are second skins; and Gortex is considered waterproof silk.

When my nephew from Miami first visited me here, he looked surprised when I got in the truck to go to town. He asked, “Don’t you want to change?” He had a point. I would have been escorted off South Beach for my look, but on Vashon, a paisley shirt, paint-stained overalls, plaid cap, and muck boots pass for acceptable shopping attire (or opera wear for that matter).

Boz, Gracie and I take in the Vashon Halloween Street Scene. (For clarification, no I was not wearing a costume.)

I have been known to push the menswear envelope. One well-dressed friend and self-appointed Mr. Blackwell saw me in the grocery store and said, “Really Tom…really?” At first I thought he was scrutinizing my three quarts of Ben and Jerry’s and bag of Cascade chips, then I realized I was being taken to task not for what I was putting in my body, but rather what I was putting on my body, specifically a madras shirt, cargo shorts, panama hat and rubber boots.  I smiled politely, and thought dare I take fashion advice from a man in a mock turtleneck and a pair of Dockers?

Just yesterday, my friend Greg dropped by for coffee, sporting a Northwest look that was worthy of a kitchen photo shoot. I do believe Eddie Bauer would have teared up over the look, I know I did. Bravo Greg, well done, and welcome back home to the Pacific Northwest! 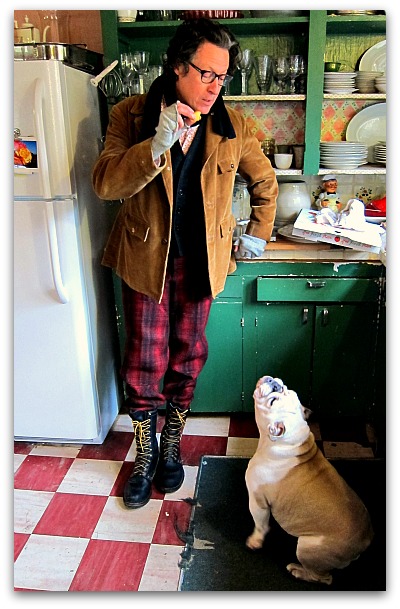 Don’t be fooled; Boz isn’t begging for that apple treat, but rather for a few fashion tips from Greg.

No Man (or Dog) is an Island